With the new EU Corporate Sustainability Reporting Directive (CSRD), carbon data becomes a crucial reporting element: More businesses will be required to report more comprehensive and detailed information on sustainability. Learn what businesses should consider for their management reports and company activities from 2024 onwards.

ClimatePartner published the first version of this article on 27 January 2022, has updated it numerous times, and now reflects the current status, as of December 2022.

Since January 2022, there have been several agreements and work steps. The following milestones are worth highlighting:

by Björn Bröskamp and Sibylle Simon

The CSRD is the EU's new reporting guideline, set to replace the current Non-Financial Reporting Directive (NFRD). It was proposed by the EU Commission last year and is expected to be applicable for the first time for the reporting of fiscal years beginning on or after January 1, 2024.

The new directive aims to significantly increase transparency in the field of sustainability. With it, more detailed reporting requirements will come into effect, making the CSRD an important element to be considered within a company´s management reporting and business activities. It is stricter in guidance and broader in scope than the NFRD, applying to four times as many companies across the EU.

Who should be prepared for the new reporting?

The widened scope of the CSRD means that instead of around 11,600 entities that currently report their non-financial data, the new directive will ask nearly 50,000 businesses to report, with around 15,000 in Germany alone. Companies that fulfil at least two of the following three conditions will have to comply with CSRD:

It's not only EU-based companies that have to be aware. The CSRD applies to any company with at least one large or listed EU subsidiary or branch with a net turnover of 40 million euros in the EU and have generated a net turnover of more than 150 million euros on the European market in the last two consecutive financial years, the CSRD also applies to them. If a company falls under the reporting obligation of the CSRD, the EU subsidiary or branch is responsible for publishing the sustainability report of the third-country company. Thus, the Directive covers all relevant business activities that take place within the EU.

The planned CSRD does not foresee any new requirements for small and medium-sized enterprises (SMEs), unless they are capital-oriented. For these, the Commission wants to introduce seperate sustainability reporting standards.

The application of the regulations will take place in four stages:

How to publish sustainability information

All relevant company information including information on sustainability activities will have to be published in the management report and must also be disclosed and accessible in a digital, machine-readable format.

CSRD reporting applies to all companies that fulfil the criteria mentioned above. A company is exempted from its publishing obligation only when it is part of a parent holding company and can refer to the holding’s report instead, provided that the holding’s report is in accordance with the EU reporting requirements. In that case, the exempted subsidiary company is required to publish the consolidated management report of the parent company reporting at group level. Also, it is required to include a reference in its own management report to the fact that the company in question is exempted from the requirements of the Directive. For all reporting companies, an external audit will be mandatory to provide limited assurance of the report.

What information needs to be disclosed

The current version of the CSRD only contains an overview of the prescribed reporting content. A detailed version of the planned reporting standards was prepared by the European Financial Reporting Advisory Group (EFRAG) and the drafts of the twelve EU Standards (ESRS) were submitted to the EU Commission on 22 November 2022. The aim is to bring the ESRS broadly in line with international reporting standards and existing sustainability reporting standards, such as those of the Global Reporting Initiative (GRI), the Sustainability Accounting Standards Board (SASB), the Carbon Disclosure Project (CDP), and others. Some of these standards also refer to the Greenhouse Gas Protocol. The CSRD and ESRS are also intended to be aligned with the EU taxonomy.

EFRAG plans to submit the first draft of the standards to the EU in November 2022 and to align them with other disclosure regulations currently being developed, such as the EU Taxonomy. A first set of reporting standards is expected to be adopted by 30 June 2023. A second set of reporting standards, which are sector-specific and adapted to different company forms, is to follow by 30 June 2024. The Commission will review the standards every three years after the Directive enters into force to take into account new developments such as international standards.

The EU Commission's new proposal for a directive stipulates that the following environmental, social and governance (ESG) aspects be considered when drawing up the reporting standards. They have each been compiled in a draft of twelve reporting standards by EFRAG: 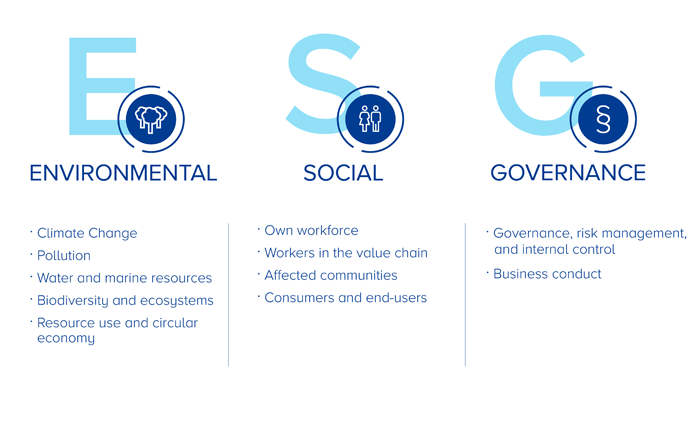 Another new requirement of the CSRD is the principle of double materiality. This principle asks companies to report from two different perspectives: how each sustainability aspect affects the company (the ‘outside-in’ perspective) and how each reporting aspect of the company affects people, stakeholders, and the environment (the ‘inside-out’ perspective). With that, the current comply-or-explain approach of the current NFRD will no longer be applicable.

After being signed by the Presidents of the Parliament and the Council, the next step is the publication of the legal act in the Official Journal of the EU. The directive enters into force 20 days after publication. Once enacted, the new rules must be transposed into national law by the EU member states within 18 months. After EFRAG has submitted the revised ESRS to the European Commission as so-called Technical Advice, the Commission will adopt the ESRS as delegated acts by the end of June 2023. This will make the standards mandatory for reporting.

The Directive must now go through the formal steps of the adoption procedure and be transposed into the national legislation of the EU Member States. According to the EU timeframe, this is planned for December 2022. The reporting standards have also not yet been finalized. The first draft is to be submitted to the European Council in November 2022. Accordingly, the new obligations will apply from the 2024 financial year at the earliest, so that the first compliant report under the new directive will have to be published in 2025.

However, the outlook is clear: Climate protection and transparent reporting on corresponding measures will become mandatory for companies. In addition, the new directive will advance climate protection, promote trust, and create a positive incentive for all companies to take responsibility. As one of several legislative initiatives, the CSRD provides both more clarity and more recognition of companies' commitment to climate protection.

ClimatePartner supports you in complying with the CSRD

Companies can seek support in complying with the new reporting requirements from external experts such as ClimatePartner. As carbon accounting is very likely to be a focus of future reporting, ClimatePartner is ideally placed to share its expertise. The various calculations of the carbon footprint of companies, products, and services, as well as the corresponding reports, can be used for compliant reporting. We also support our clients in defining clear climate action strategies and aligning them with the requirements of the Science Based Target initiative (SBTi) and, in the medium term, with a Net Zero strategy. Such strategies, developed in cooperation with our consulting teams, can also be integrated into compliant sustainability reports. According to the current draft of the standards, the social impacts of our carbon offset projects will also be applicable for reporting in accordance with CSRD.