This is the desperately insistent call that the United Nations and climate scientists have kept repeating for almost three decades – every single time when it comes to climate change and its impacts on people, the environment, and economies. The UN made it clear by emphasizing that this decade is our make-or- break opportunity to limit global warming to 1.5°C and steer the world toward a net zero future by 2050.

Every effective strategy to limit climate change requires a transition to net zero emissions. Even though achieving this goal is challenging, it remains the only real solution to combat climate change and preserve the planet for future generations. This requires businesses and organizations across all industries and sizes to accelerate their commitments to decarbonize their portfolios, achieve net zero targets, and progress towards climate sustainability.

In this article we will explain why reducing greenhouse gas emissions is crucial to tackling climate change. Furthermore, we will demonstrate how to reduce your company’s carbon footprint, known as corporate carbon footprint (CCP), meet your organization’s emission reduction goal, and how to get there.

“It’s now or never if we want to limit global warming to 1.5°C”. This was the clearest and strongest message so far by Jim Skea, co-chair of Working Group III of the Intergovernmental Panel on Climate Change and one of the most renowned UN scientists, in an appeal urging government and business leaders around the world to take climate action immediately. The most recent UN climate report, known as the Sixth Assessment Report of the Intergovernmental Panel on Climate Change (IPCC), comes with a crystal-clear warning: “without immediate and deep emission reductions across all sectors, it will be impossible” to combat climate change. 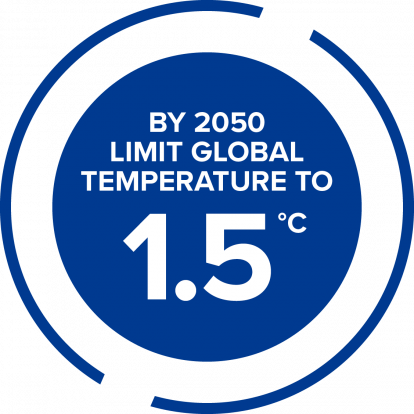 But there is some good news: the IPCC from 2022 shows that keeping global temperature rise under 1.5°C by the end of the century is still possible, but it will require rapid, immediate, and economy-wide greenhouse gas (GHG) emission reductions, as well as the removal of carbon from the atmosphere. But why is it crucial to reduce GHG emissions?

It is not too late to act: limiting global warming under 1.5°C is just possible. But it requires immediately concrete climate action.

Video: What are greenhouse gas emissions and why companies need to act now

In this video, we explain why reducing greenhouse gas emissions is crucial to tackling climate change. It is not too late to act: limiting global warming under 1.5°C is just possible. But it requires immediately concrete climate action.

Why is it important to reduce GHG emissions?

You may have heard that increasing global warming is causing climate change which is responsible for extreme weather events such as longer and more frequent droughts, heat waves, heavy downpours, tornadoes, tropical cyclones, and floods. This climate change poses challenges for governments, businesses, and people around the world.

For better understanding, we first need to define different terms that are used in this article: “weather” and “climate”. According to NASA, the weather describes “atmospheric conditions that occur locally over short periods from minutes to days” such as rain, snow, clouds, winds, floods, or thunderstorms. While the term climate refers to “the long-term regional or even the global average of temperature, humidity and rainfall patterns over seasons, years or decades”. So, to combat climate change the answer is clear: we need to limit anthropogenic, human-caused, global warming to 1.5 °C. 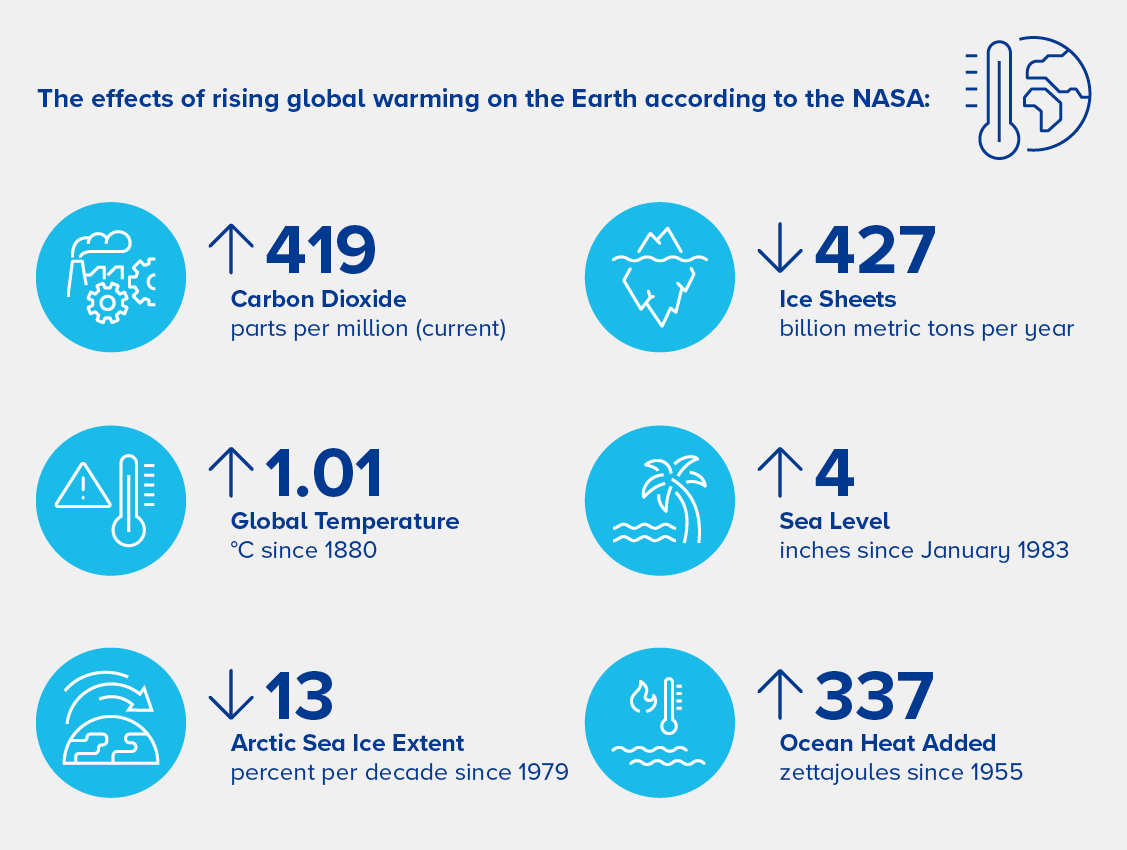 Why must global warming be limited to 1.5°C

Global warming describes the long-term rising of the planet’s overall temperature, which has been ongoing at least since record keeping began in 1880. According to the National Oceanic and Atmospheric Administration (NOAA), the global annual temperature increased between 1880 and 1980 at an average rate of 0.07 degrees Celsius per decade. Since 1981, the rate of increase has accelerated to 0.18 °C per decade, which has led to an overall increase in global average temperature at a rate of 1.1 °C today compared with pre-industrial levels. So, what is the cause of the global temperature rise?

Since the 1800s and the beginning of the industrial revolution, human activities, like transportation, industry, agriculture, and electricity have been the main driver of climate change, primarily due to burning fossil fuels such as coal, oil, and gas. Burning fossil fuels generates greenhouse gas emissions, which are the most significant driver of observed climate change since the mid-20th century. Greenhouse gases refer to various types of gases that trap heat in the atmosphere such as carbon dioxide, methane, nitrous oxide, and water vapour. They let the sun’s light in but keep some of the heat from escaping like the glass walls of the greenhouse acting like a blanket insulating the Earth. This phenomenon is known as the greenhouse gas effect. The more greenhouse gases in the atmosphere, the more heat gets trapped, strengthening the greenhouse effect and increasing the Earth’s temperature. 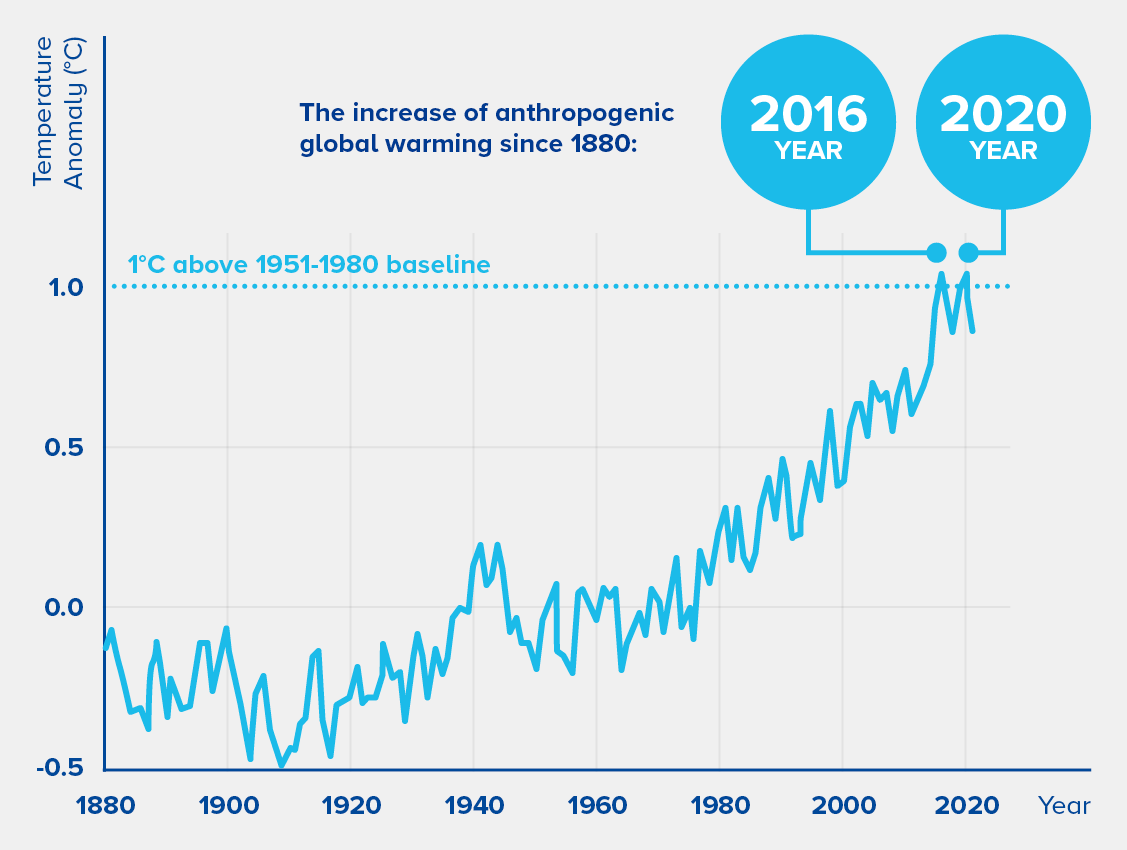 The fact, that carbon dioxide levels in the atmosphere are, according to NASA, at 419 parts per million (ppm) in 2022, their highest levels in 650,000 years, illustrates best the dire urgency to limit anthropogenic global warming, which means the human-caused rise of the Earth’s surface temperature.

Understanding the impact of GHG emissions

To understand why it is unequivocal to drastically reduce and cut down those emissions, we need to shed light on the characteristics of the major GHG emissions caused by human activities and their impact on climate change.

There are two distinct elements between the different types of GHGs: Firstly, their ability to absorb energy, which is called radiative efficiency. Secondly, their lifetime, which means how long they stay in the atmosphere. A scientific metric, called the Global Warming Potential (GWP), was developed to determine these key factors.

GWPs are values that allow direct comparison of the impact of different GHGs on Earth’s warming by comparing their ability to absorb the energy and how long they remain in the atmosphere compared to CO2. Carbon dioxide is taken as the gas of reference and given a 100-year GWP of 1 because it has a very long residence time in the atmosphere that can last thousands of years. 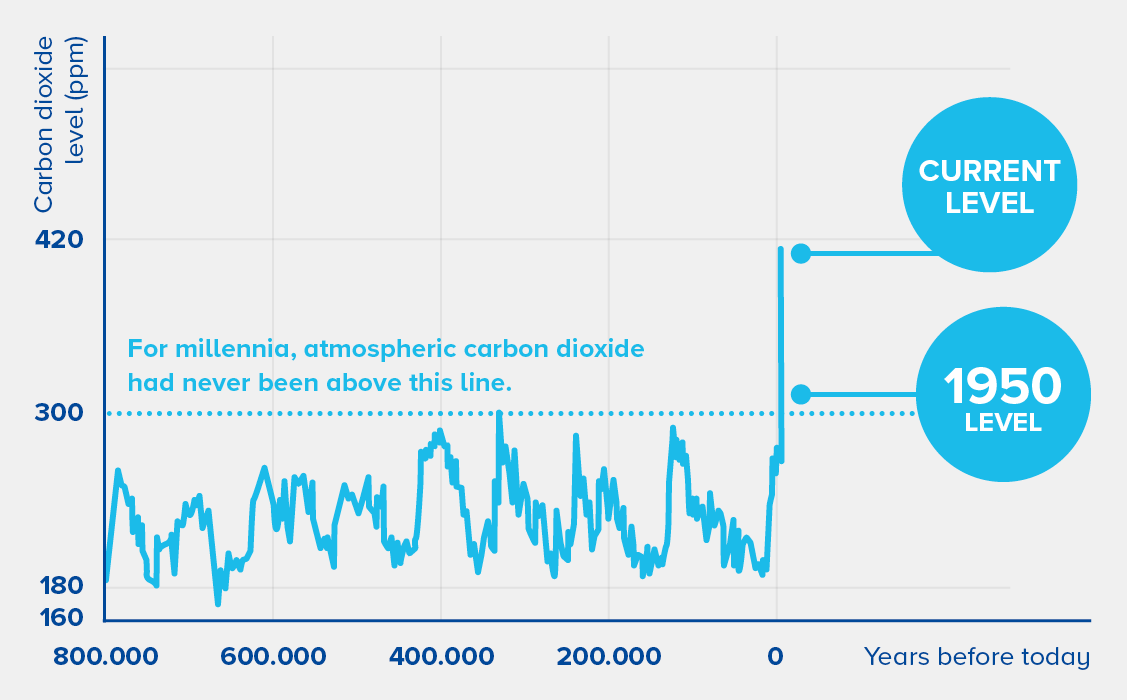 To exemplify this is the following comparison between CO2 emissions, methane, and nitrous oxide, which are the greenhouse gases with a significant impact on climate change. While methane stays in the atmosphere for approximately a decade and nitrous oxide for around 120 years, CO2 remains in the atmosphere for up to 1000 years. Measured over 20 years, methane, which is the second largest contributor to climate change, is 56 times more potent than CO2 in causing global warming, while nitrous oxide is 280 times more potent. 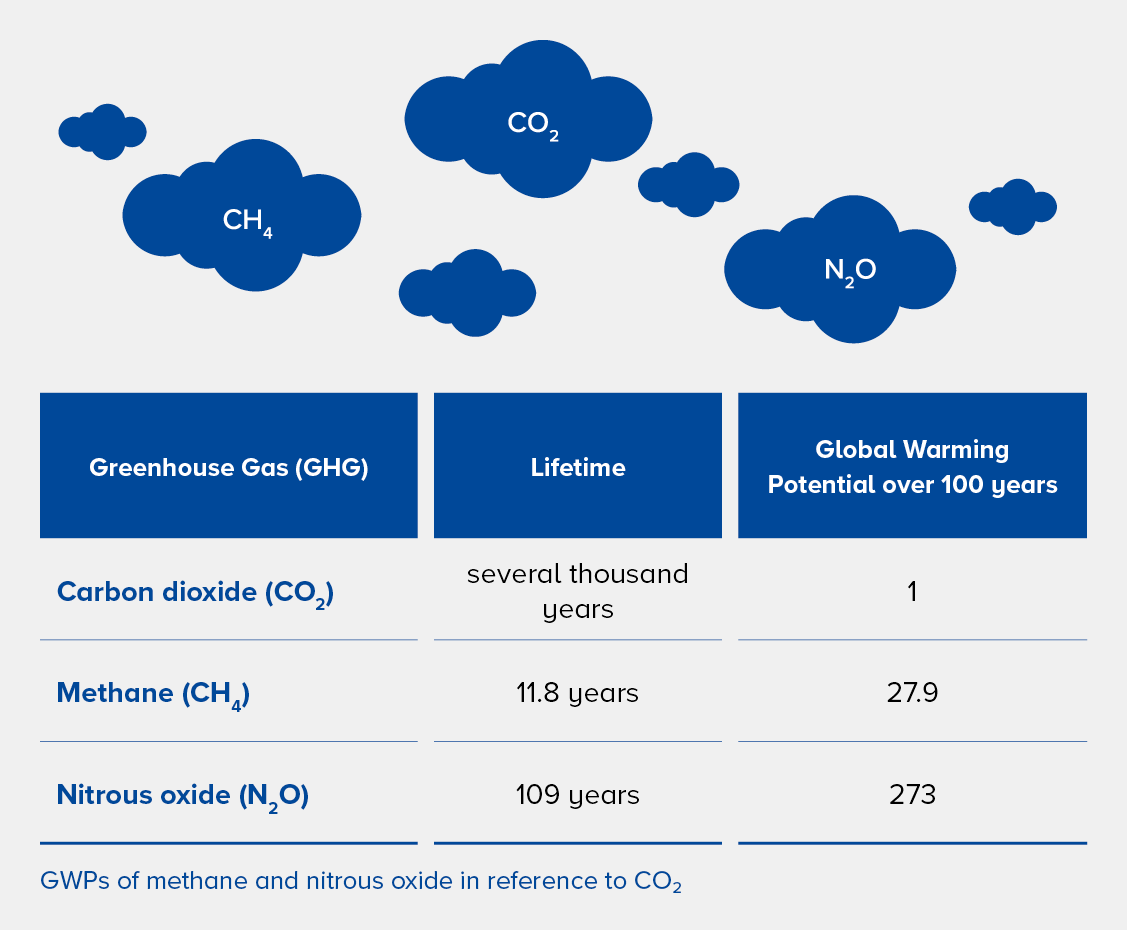 The rapid increase of greenhouse gases in the atmosphere has warmed the planet at an alarming rate. While Earth’s climate has fluctuated in the past, atmospheric carbon dioxide has not reached today’s levels in hundreds of thousands of years. Human-induced climate change “has caused widespread adverse impacts and related losses and damages to nature and people, beyond natural climate variability”, as stated in the most recent IPCC report.

A report from the World Meteorological Organization predicted that the world could reach 1.5°C above pre-industrial levels by 2025, in only the next four years. Going beyond that red line means significantly increasing the impact of climate change, like extreme weather conditions and rising sea levels, just to name a few examples. “Every fraction of additional warming beyond 1.5°C will result in increasingly severe and expensive impacts“, as the UN Environment Program stated.

The answer is clear: To limit global warming to 1.5 degrees Celsius compared to pre-industrial levels, it is abundantly obvious that we need to drastically reduce greenhouse gas emissions by at least 43% by 2030 below 1990 levels and reach net zero emissions by 2050, as enshrined by the Paris Agreement.

The most evident answer to the biggest challenge of our times is to reduce greenhouse gas emissions. However, meeting the global GHG emission reduction levels and achieving the net zero target by 2050 dictated by the Paris Agreement will demand long-lasting solutions and comprehensive climate action strategies.

Meanwhile, as a business, you need to recognize that elaborating and putting in place a GHG emissions reduction strategy requires holistic organizational and operational approaches across the whole company to have maximum impact.

If we look at key hotspots, different measures can be adopted to pave the transition to net zero. The following measures play an integral part of a holistic climate action plan:

Incorporating a climate action strategy into the corporate strategy

Driving down greenhouse gases will hugely contribute to meeting the net zero goal, but at the same time improve air quality and public health, and spur investments to pave the net zero economy while reducing costs and risks from climate change.

However, this requires a stronger commitment of companies and organizations around the world to set holistic climate action strategies and take near-term and long-term actions that focus on reducing greenhouse emissions and investing in clean technologies.

Moreover, a climate action strategy should be embedded in the corporate strategy as an integral part of it. This allows you to implement it in the long term and a target-oriented manner. The management needs also to make sure, that the strategy of the company and the mitigation efforts are aligned.

A climate action strategy should be embedded in the corporate strategy as an integral part of it. This allows you to implement it in the long-term and in a target- oriented manner. The management also needs to make sure that the strategy of the company and the mitigation efforts are aligned.

Climate action for a business is no longer considered a matter of corporate responsibility or a branding opportunity. It is more than that: it is about remaining relevant and competitive. Certainly, as a company being sustainable, addressing climate change within your operations and supporting the overall transition to a net zero economy provide a competitive advantage.

But at the same time, taking climate action has become increasingly critical for companies to face the growing consumer demand, investor pressure, upcoming regulatory requirements and even to attract qualified and skilled manpower who are increasingly considering sustainability as an important criterion to accept a job offer. Incorporating an effective holistic climate action strategy at the core of your corporate strategy ensures your business’s long-term competitiveness and puts your company on firm footing to meet the net zero goal and take climate leadership that inspires other companies to follow.

It is a matter of fact, that real solutions to tackle climate change require ambitious and accelerated action on a global scale. Businesses of all sizes and from all industries are called to drastically reduce their corporate carbon footprint. However, governments need to set policies and frameworks that encourage economies on the path to net zero. Universities around the world have a key role to play in educating societies about reducing GHG emissions and pushing forward research on solutions to tackle climate change.

Connect with us to start your climate action journey.

Please fill out the form, and we will send you the eBook per e-mail.