The complete guide to understanding Scope 1, 2, and 3 emissions

Companies of all sizes and in all industries are increasingly recognizing the need to reduce their carbon emissions and address sustainability issues within their operations to become net zero businesses. However, climate action is a journey that requires both short-term and long-term strategies and tangible actions.

The foundation for any efficient climate action strategy is to track, allocate and measure your carbon emissions with accuracy. Understanding your Corporate Carbon Footprint and the different types of emissions, classified as Scope 1, Scope 2, and Scope 3, could be a challenging process but is a crucial step to reducing your organization’s climate impact and achieving climate action goals. This guide will walk you through the fundamental information around Scopes 1, 2, and 3.

The international community has long recognized the necessity of reducing greenhouse emissions and stopping global warming. With the Kyoto Protocol in 1997, they agreed for the first time in history on binding targets and measures for combating climate change. This agreement was the basis for the Greenhouse Gas (GHG) Protocol.

What is the Greenhouse Gas (GHG) Protocol?

Launched in 1998, the GHG Protocol is the global standard framework for measuring and managing greenhouse gas emissions (GHG) from private and public sector operations, value chains, and mitigation actions.

Formed through a partnership between the World Resources Institute and the World Business Council for Sustainable Development, the GHG Protocol created accounting standards, tools, and training to help businesses to measure and manage climate-warming emissions. Furthermore, it provides guidelines and requirements for companies, enabling them to prepare an inventory of their greenhouse gas emissions – which also includes the calculation of their corporate carbon footprint.

The corporate carbon footprint describes the total amount of greenhouse gas emissions (including the CO2 emissions) that come from all company’s activities, including direct and indirect emissions. But why is it so important to reduce greenhouse emissions?

To understand the necessity of reducing greenhouse gas (GHG) emissions, it is important to demonstrate the impact of their increase on climate change. 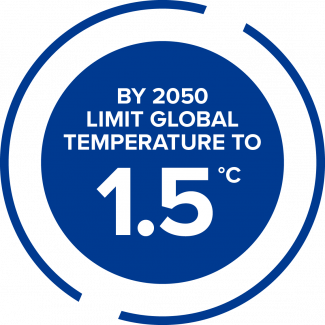 According to the sixth IPPC report, human activities, such as burning fossil fuels, cutting down forests, etc., have warmed the climate “at a rate that is unprecedented in at least the last 2000 years”. Human influence added enormous amounts of greenhouse gases to those naturally occurring in the atmosphere, increasing global warming, and driving climate change. For this reason, the Paris Agreement on Climate Change dictates a global responsibility to reduce greenhouse gas emissions and to limit the global temperature increase to 1.5 degrees above pre-industrial levels by 2050.

Greenhouse gases (GHG) refer to various types of gases that trap heat in the atmosphere. By absorbing the sun’s energy and slowing the rate at which the energy escapes to space, the GHGs act like a blanket insulating the Earth.

There are two distinct elements between the different types of GHGs: Firstly, their ability to absorb energy, which is called radiative efficiency. Secondly, their lifetime, which means how long they stay in the atmosphere. To determine these key factors a scientific metric, called the Global Warming Potential, was developed.

The Global Warming Potential (GWP) is a unit of measure of the relative radiative effect of a given GHG compared to another GHG over a chosen time horizon from 20 up to 500 years and uses carbon dioxide (CO2) as a reference gas. CO2 represents, according to the GHG Protocol, the main greenhouse gas contributing to about 80% of the overall warming effect of current emissions.

Therefore, the main idea behind the GWP is to compare the impact of different gases on global warming over a given time, relative to the emissions of one ton of CO2 emissions. An example is the following comparison between CO2 emissions, methane, and nitrous oxide, which are the greenhouse gases with the significant impact on climate change: While methane stays in the atmosphere for approximately a decade and nitrous oxide for around 120 years, CO2 remains in the atmosphere for up to 1000 years. 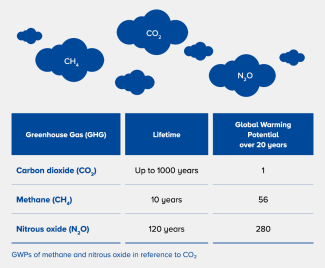 Measured over 20 years, methane is 56 times more potent than CO2 in causing global warming, while nitrous oxide is 280 times more potent. These values refer to the Global Warming Potential (GWPs) of the mentioned gases.

Based on the GWPs of the different gases, the metric measure carbon dioxide equivalent (CO2e) is used to calculate the Corporate Carbon Footprint. It accounts for in Tonnes of CO2e the carbon dioxide emissions and other greenhouse gas emissions, such as methane, nitrous oxide, and others, associated with a company, its operations, and value chains.

Measuring the GWPs permits to analyze the impact of the different GHGs on climate change and allows policymakers and decisions takers to compare emissions reduction opportunities within their corporations.

How to differentiate between Scope 1, 2, and 3 emissions

The GHG Protocol Corporate Standard categorizes greenhouse gas emissions associated with a company’s Corporate Carbon Footprint (CCF) as Scope 1, Scope 2, and Scope 3 emissions. However, this categorization does not apply to the Product Carbon footprint (PCF), which describes the total amount of greenhouse gas emissions generated by a product or a service over the different stages of its life cycle.

The concept of the scope itself is generally used in project management and refers to all the processes and resources needed to complete a project. According to the GHG Protocol, the main idea behind this categorization is, on the one hand, to “help delineate direct and indirect emission sources”, and on the other hand, to “ensure that two or more companies will not account for emissions in the same scope.” So, how can you differentiate between Scope 1, 2, and 3 emissions?

However, if your company is for example an industrial facility that generates its energy on-site from owned or controlled sources, the greenhouse emissions associated with the energy generation are classified as direct Scope 1 emissions. The same applies to companies, such as electricity utilities or suppliers, which control their energy generation facilities and sell all their power into the local grid. The greenhouse gas emissions from these generation facilities are reported in Scope 1 emissions.

Scope 3 includes all indirect emissions that occur in the value chain of a reporting company. To make a clear distinction between Scope 2 and Scope 3 categories the US Environmental Protection Agency (EPA) describes Scope 3 emissions as “the result of activities from assets not owned or controlled by the reporting organization, but that the organization indirectly impacts in its value chain.” Even though these emissions are out of the control of the reporting company, they can represent the largest portion of its greenhouse gas emissions inventory.

Based on the financial transactions of the reporting company, the GHG Protocol divides the Scope 3 emissions into Upstream and Downstream emissions and classifies them into 15 different categories. 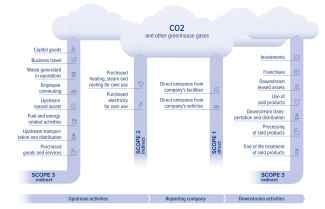 Scope 1, 2 and 3 emissions according to the GHG protocol.

Certainly, not every Scope 3 emissions category will be relevant for every company but knowing and understanding them is very useful to be able to design and put in place effective reduction strategies.

What the GHG Protocol requires your company to do

The GHG Protocol requires that companies account for and report all Scope 1 and Scope 2 emissions. However, it gives them flexibility in whether and how to account for Scope 3 emissions.

Identifying and accurately calculating greenhouse emissions, especially those that occur in the value chain and are out of control, can be for every company very challenging, as it is very often a complex and detailed task because of the numerous parties and processes involved. An experienced partner can help you to address your Scope 3 emissions by conducting a screening to determine where the emissions in your value chain lie and where to focus your reduction efforts.

Furthermore, it helps you to develop a full corporate greenhouse gas emissions inventory, incorporating Scope 1, Scope 2, and Scope 3 emissions. It also provides you with guidance on how to reduce your Carbon Footprint and your impact on climate change and in the long-term make the transition to a Net Zero Economy.

See our services for further information on how to kick off your sustainability journey.

Understanding your Corporate Carbon Footprint and the different types of emissions, classified as Scope 1, Scope 2, and Scope 3, could be a challenging process. However, it is a crucial step to reducing your organization’s climate impact and achieving climate action goals.

This video will walk you through the fundamental information around Scope 1, 2, and 3 emissions.

Connect with us to start your climate action journey. 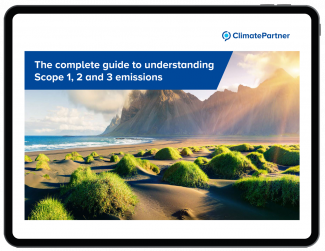